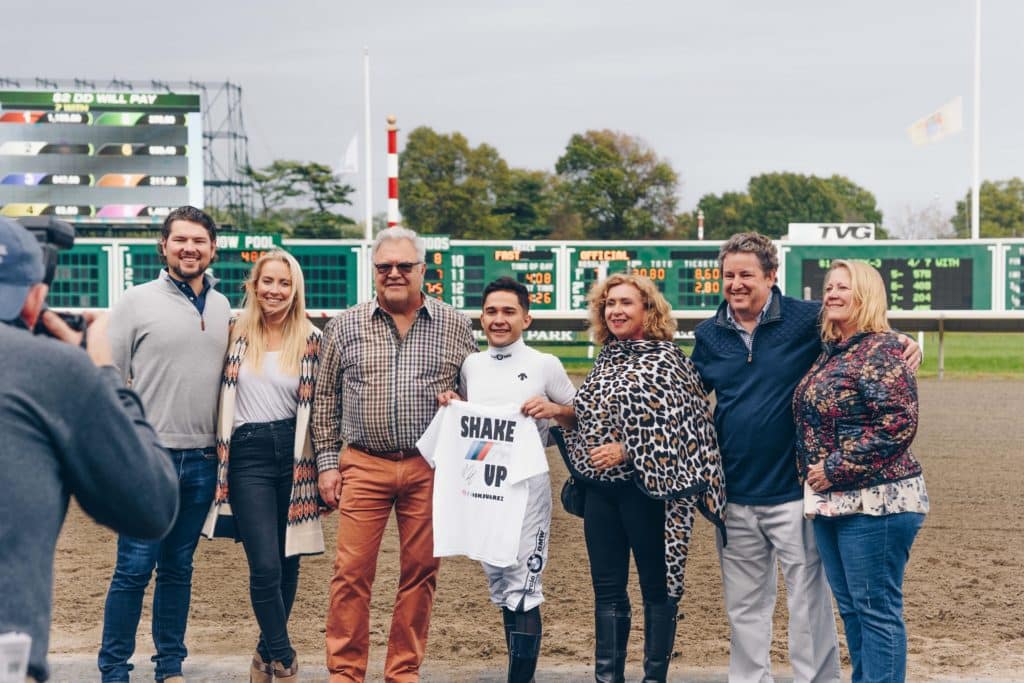 It was no coincidence that Circle BMW selected Monmouth Park Racetrack as their venue for an employee picnic. The strategic decision was made to support Circle BMW’s Brand Ambassador, Jockey Nik Juarez. Since the start of the summer horse racing season, Juarez has represented Circle BMW, wearing the company’s logo on his formal riding apparel while racing at Monmouth Park and when appearing at Circle BMW events. An added bonus is that Juarez is devoted to the BMW brand and currently owns a BMW X6 and BMW 330i.

The picnic afforded an opportunity for Circle BMW employees to see Juarez ride and cheer-on the park’s leading jockey. More than 80 Circle BMW employees and their family members enjoyed a barbecue lunch while sitting track side in a private picnic area. Out of nine races, Juarez was scheduled to ride in seven races. This gave the Circle BMW group ample opportunities to see Juarez in action. The highlight of the day was when Circle BMW President, Tom DeFelice and his family, along with Circle BMW General Manager Larry Powell and his wife, went into the winner’s circle for a picture with the first place horse and jockey. (Unfortunately, it was not with Juarez, as his horse was scratched from the race. Juarez did join in on some of the pictures!)

“Having a Circle BMW Brand Ambassador at Monmouth Park Racetrack has been a wonderful way to remind our local residents that Circle BMW is THE BMW store at the Jersey Shore,” explains Pamela Marshall, director, Marketing & Communications, Circle BMW. Marshall added, “It has been a privilege to work with Nik and stand alongside him in our efforts to promote our BMW Center in Eatontown.”

A Jersey Shore tradition since 1870, Monmouth Park has a long and storied tradition. After opening and closing twice during the 1800s due to financial issues and state laws banning horse wagering, Monmouth Park re-opened in June 1946 after a 53 hiatus. Today, Monmouth Park has been restored to the glory and prestige of earlier years playing host to festivals, concerts and community events. In 1986, the New Jersey Sports and Exposition Authority purchased Monmouth Park.