Farewell to a Dear Friend 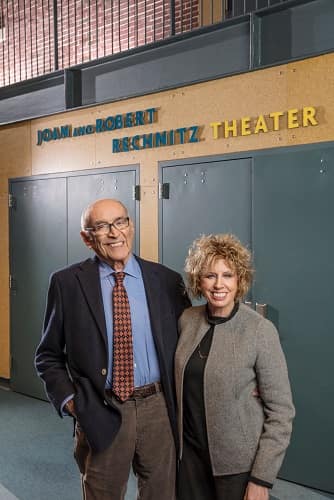 In remembrance of Robert (Bob) Rechnitz, the staff at Circle BMW wishes to acknowledge his many years of patronage and friendship. While much has been, and surely will be written about Bob, we know firsthand the impact he and his wife Joan have had on Monmouth University, Red Bank, our surrounding area and even far beyond to places such as Israel. In 1994, Bob and Joan founded the Two River Theater at Monmouth University. Over the next ten years the shows earned accolades, audiences grew, and loyal donors continued to support the theater. After a brief stint at the Algonquin Arts Theatre in Manasquan, it became clear that more space was necessary which led Bob and Joan to a property on Bridge Avenue in Red Bank. In 2005, the Two River Theater opened and continues to grow offering theatrical productions, annual events and serving thousands of students and community members through arts and humanities programs at the theater, in schools and throughout the region.

The Rechnitz’s are generous philanthropists who have provided funding to numerous organizations in our area such as Brookdale Community College, Monmouth Conservation Foundation, Monmouth University, NJ Conservation Foundation and Riverview Medical Center. Perhaps Bob’s greatest accomplishments lie within his family: Joan, to whom he was married for 58 years, daughter Emily, and sons Adam and Josh, as well as 3 grandchildren – Flora, Max and Esme.

We say farewell and thank you to Bob. May you rest in peace.

Your friends at Circle BMW

0 comment(s) so far on Farewell to a Dear Friend